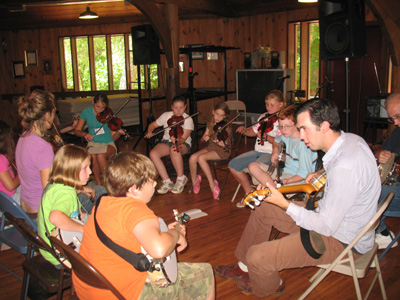 Thanks to everyone who helped make this year one of the best Cowan Creek Mountain Music Schools ever! We have been building this school, and the extended family that belongs to it, for seven years now. From all the staff, faculty and volunteers of CCMMS, we want to extend a big thank you to all the wonderful students who joined us this year. We also want to thank all the local folks who came out in numbers to join in the square dances and attend the many performances throughout the week.

Several folks have been asking about the wonderful photographs that Kelly Christian took during the music school. As soon as we get the files, we will create an online album and email everyone with the link (and also notify you here!). It may seem like a long way off, but make sure to save the week for next year: June 22-26, 2008! More news to come as we make plans for more music between now and then!  All the best,Suzanne