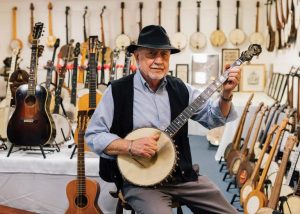 Digital Library of Appalachia: dla.acaweb.org.
This website is maintained by Berea College; it has a collection of traditional
music recorded by several mountain colleges.Included is the music of the Couch
family of Harlan County, Kentucky, which was recorded by Leonard Roberts in the
1950s. Also included are excellent recordings of traditional Black musicians.

Lomax traveled through Kentucky in 1937; he recorded traditional musicians
singing and playing the dulcimer, banjo, fiddle, and guitar.This is an excellent
source for the diversity of music that existed before Kentucky’s traditional
culture collapsed after World War II.

Two books that are essential reading for Kentucky’s traditional music:

Josiah H. Combs: Folk-Songs of the Southern United States,
Ed. D. K. Wilgus, 1967. Combs (1886-1960) began his education at the Hindman
Settlement School and did his doctoral dissertation at the University of Paris;
his dissertation is the basis for this book. Although Combs had an upper-class
view of banjo music, he did leave an excellent record of its origin in east Kentucky.

Leonard Roberts: Sang Branch settlers: Folksongs and tales of a
Kentucky mountain family, 1974. Roberts (1912-1983) investigated the music
of the Couch family of Harlan County, Kentucky. All children of the Couch family,
girls as well as boys, learned to play banjo early in the 20th century, which was typical
for mountain families that were musical. The Couch children learned to play
on a gourd banjo made by their grandfather.

The foundational work for Black folk music as well as the banjo’s history is
Sinful Tunes and Spirituals, Black Folk Music to the Civil War,
by Dena J. Epstein, 1977. This book should be read by anyone interested in
American music.

A good source for used as well as new books: www.abebooks.com.